In the Hand of the Goddess is the second in a series of four books, The Song of the Lioness. It details the squire- and knighting of Alanna of Trebond, who has hidden her real sex in order to become a knight.

Alanna, now squire to none other than Prince Jonathan of Conté, has to protect her knight and friend through their first war with Tusaine. She slowly learns more about her gift, using it primarily to heal, and continues to hide her true gender while both George and Jon have fallen in love with her. She continues to be suspicious of and protect her liege from his cousin Roger, on the way to her becoming a knight.

"Disguised as a boy, Alanna of Trebond becomes a squire-to none other than the prince of the realm. But Prince Jonathan is much more to Alanna; he is her ally, her friend, and one of the few who know she's a girl.Now it will take all of Alanna's skill, strength, and growing magical powers to protect him from the mysterious evil sorcerer bent on his distruction-and hers!"
—Back cover summary, Random House's 1984 edition.

While camping in the woods on her way back to Corus from an errand, Alanna's campsite, set up under a willow tree, is discovered by a small black cat whom she names Faithful. It does not escape Alanna's notice that his eyes are as purple as her own; she also finds out that Faithful can talk to her, although to others it sounds as if he is meowing. Soon after, the Great Mother Goddess, Alanna's patron, shows up at her campfire. She gives Alanna the Ember-stone that allows the young woman to see magic being worked around her.

As she progresses into knighthood, Alanna's feminine side is nurtured as well. After a few visits with Eleni, George Cooper's mother, Alanna realizes that part of her wants to act like the ladies she sees in the Court. Eleni takes Alanna under her wing and secretly teaches her how to dress and behave like a woman. The change does not go unnoticed by George or Prince Jonathan, the only two friends with whom she has shared her secret about her sex. Though George has pursued Alanna since her page hood, Jonathan realizes the woman at his hands. They share their first kiss after Jon rescues Alanna when she is kidnapped by nobles from Tusaine, and they become lovers soon after, although George made it clear to Alanna that he loved her before they went to war.

Alanna withstands the Ordeal of Knighthood and becomes a knight. Her twin brother, Thom, presents her with a shield featuring the crest of their home estate, Trebond. When he and Alanna are alone after the ceremony, he shows her that when she is ready to reveal to everyone that she is a woman, the Trebond crest will disappear, and in its place will be the picture of a golden Lioness rearing on a field of red.

In a final showdown against her long-time nemesis, Alanna kills Duke Roger of Conté, her prince's cousin, who is to inherit the throne should anything happen to Jonathan. She does this after finding out about Roger's plans to kill the king, the queen, Jonathan, and even Alanna herself. During her duel with Roger, he slices through the special corset she wears to keep her breasts flat. It is revealed to everyone that she is very much a woman. Nevertheless, she is determined to go on and beat Roger so that he cannot kill the people she loves. When Roger uses an illusion to confuse Alanna regarding which of his swords is real and which is the illusion, she uses the amulet given to her by the Goddess. She is able to beat him.

After her battle with Roger, Alanna decides not to stick around to deal with the initial uproar over her sex. With Faithful, her longtime manservant Coram, and her horse Moonlight, she sets off for the desert in the South, in search of more adventure.

In this book, Gareth "Gary" of Naxen the Younger's squire differes from chapter to chapter.

In the first chapter of this book, after Alanna returns from the errand she had run for her friend Sir Myles, she is having a quiet day with her other noble friends, Gary and his squire Geoffrey of Meron, Raoul and his squire Douglass of Veldine, Prince Jonathan and Alex (Alex's squire is not mentioned here):

"...Gary and Raoul, with the afternoon off, had given their squires Geoffrey and Douglass free time as well..."

In the following chapter, it is mentioned that Gary's Squire is Sacherell of Wellam, and Raoul's squire is Douglass of Veldine (Alex's squire is again not mentioned):

It is possible here that Geoffrey has been knighted and Raoul has taken on Sacherell as his new squire, but then In the third chapter, it is said that Alex's squire is Geoffrey of Meron:

"...Only Alex and his Squire, Geoffery of Meron, seemed unaffected by Delia..."

Characters in "In the Hand of the Goddess" 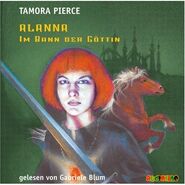 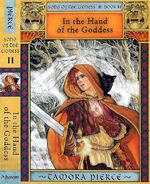 2011 US reissue
Add a photo to this gallery

Retrieved from "https://tamorapierce.fandom.com/wiki/In_the_Hand_of_the_Goddess?oldid=24536"
Community content is available under CC-BY-SA unless otherwise noted.