The Emelan Universe, also known as Circle Universe, is the setting of two quartets and three stand-alones by Tamora Pierce. As the country of Emelan is the main backdrop for most of the books, it is dubbed the Emelanese Universe. "Circle Universe" refers to the titles of the first two quartets. This is much like the Tortallan Universe—as Tortall is the main setting for most of the books in that universe as well.

Note: Pierce is now working on a trilogy about Numair Salmalín of the Tortallan Universe so it is unlikely that the following books will be published anytime soon.

Countries of the universe 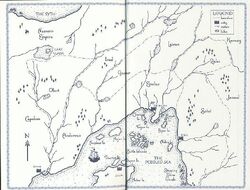 Geographically speaking, the Pebbled Sea is based on the Mediterranean. Emelan specifically is geographically corresponds to Greece, as both are located in the east of the region, are peninsulas, and are somewhat similarly shaped—they also share the same climate. The new continents to the west are likely based on the Americas. The Battle Islands may be Crete due to its volcanic activity and proximity to Emelan.

Most of the cultures around the Pebbled Sea as well as many to the west are based on the Middle East. Emelan also has some Greek characteristics with Baklawa being part of their cuisine.

Namorn is heavily based on Russian and Scandinavian culture.

Yanjing is based on the cultures of ancient China, Japan, and Mongolia. Linguistically, it is based on Chinese. It is also noted for its miniature trees, which comes from Penjing. They are also excellent silk-workers, and Sandry even admires their weavers for their skill with silk.

Gyongxe is based on Tibet, as the mountains have very high altitudes and are sacred.

Tharios is based on ancient Athens. It is a democracy and the only monotheistic culture, and their one god may be based on "The One" of Platonism. Their caste system is based on the Japanese feudal hierarchy, with the Yaskedasi being based on Geisha and the Prathmun on the Burakumin. The belief in spiritual pollution and cleanliness mirrors that of the Shinto religion.

The Living Circle religion seems to based on Buddhism, and their gods seem to be Shinto-based as they are nature deities.

Retrieved from "https://tamorapierce.fandom.com/wiki/Circle_Universe?oldid=34512"
Community content is available under CC-BY-SA unless otherwise noted.