Alanna: The First Adventure was Tamora Pierce's first young adult novel, and the first installment of the Song of the Lioness quartet, revolving around Alanna of Trebond. It covers Alanna's training as a page, and takes place over three years, starting in Trebond when she and Thom first decide to switch places, and ending in the Black City with Jon's promise to make her his squire.

"From now on I'm Alan of Trebond, the younger twin. I'll be a knight.

And so young Alanna of Trebond begins the journey to knighthood. Though a girl, Alanna has always craved the adventure and daring only for boys; her twin brother, Thom, yearns to learn the art of magic. So one day they decide to switch places: Thom heads to the convent to learn magic; Alanna, pretending to be a boy, in on her way to the castle of King Roald to begin her training as a page.

But the road to knighthood is not an easy one. As Alanna masters the skills necessary for battle, she must also learn to control her heart and to discern her enemies from her allies.

Filled with swords and sorcery, adventure and intrigue, good and evil, Alanna's first adventure begins—one that will lead to the fulfillment of her dreams and the magical destiny that will make her a legend in her land. "

"TO CLAIRE,
who made it all finally happen,
AND TO FRANCES,
who told me to talk to Claire"
—Dedication taken from the Kindle edition

Alanna of Trebond does not want to be sent away to learn to be a lady any more than her brother Thom wants to be a knight. However, this is what their father, Alan of Trebond, a man absorbed completely in his studies since his wife's death, has ordered for them.

Alanna and Thom take matters into their own hands. The identical twins switch places, and Thom goes to the temple where Alanna was to go, planning to study sorcery. Alanna cuts her hair and disguises herself with the name Alan of Trebond and goes to Corus to try for knighthood.

Alanna makes both friends and enemies at the palace immediately. She particularly becomes friends with Jonathan of Conté, Gareth of Naxen, and the King of the Rogue George Cooper. An unnatural fever, one that drains healers of their power and can kill them, falls upon Corus. Only after all of the city's healers are exhausted does Jonathan, the heir to the kingdom, fall fatally ill.

Alanna uses her magic to save Jonathan. Soon after, Roger of Conté, a powerful mage, comes to Corus in order to teach the pages and squires how to use magic. For a reason unbeknownst to her, Alanna hates the outwardly handsome and charming man from their first meeting. Later, she learns that Roger is second in line for the throne, next to Prince Jonathan, since Queen Lianne of Conté is unable to bear anymore children. She suspects that Roger sent the fever and is trying to hurt Jon.

Alanna acquires, on a mystery-filled trip to ruins near the home of Myles of Olau, a sword possessing the magic of the Old Ones that she dubs "Lightning". Roger is shocked and noticeably nervous when he notices the sword.

Later, on a trip that is supposed to be for squires only, that Alanna is allowed on because of Jonathan, Roger warns the squires and page not to go anywhere near a city of black stone, the Black City. Alanna realizes that Roger means to trick Jon into going there and follows the Prince to the city. There, the two confront the Ysandir, strange beings of old who try to kill them. Together, Alanna and Jon are able to combine their magics and defeat them, but not before the beings make Alanna's clothes disappear, revealing her true gender to the astonished prince.

The book closes with the prince promising to make Alanna his squire. So far, the only ones in Corus who know Alanna's gender are Jon, George Cooper, Eleni Cooper, and her manservant, Coram Smythesson.

Alanna: The First Adventure has been published in different languages.

In the German edition the title was changed to "Die Schwarze Stadt" (The Black City), translated by Ulla Neckenauer. The German publisher is the Arena Verlag. The first German edition was published in hardcover 1985 by the Arena Verlag. Later followed several paperback editions. In 2006 a German audiobook was released by Audiolino, read by Gabriele Blum. For the German audiobook version the book was abridged.

In later German reissues the book was released along with the German translation of In the Hand of the Goddess (Alanna - Im Bann der Göttin) as a single volume titled "Alanna - Ankunft in der Schwarzen Stadt" (Alanna - Arrival at the Black City). This bindup was released 2003 by Arena as hardcover and 2005 by Bastei Lübbe as paperback.

In the Danish edition, published by Forlaget Tellerup, the title was simply shortened to "Alanna". Den Grimme Ælling also published a Danish audiobook. 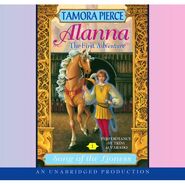 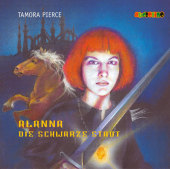 German bindup with ItHotG (2005)
Add a photo to this gallery

Retrieved from "https://tamorapierce.fandom.com/wiki/Alanna:_The_First_Adventure?oldid=24534"
Community content is available under CC-BY-SA unless otherwise noted.